For the longest time, I thought that Bamyan – the name of a valley in the Central Afghanistan – was a strange derivative of the world “bam” (roof in Farsi). I felt that the name should come from the word roof. It was so high that walking up to the top of the gorges, through their tangled paths sometimes did feel like I was climbing up onto the roof of the world. It certainly was not Pamir, but 2,500 kilometers (8,000 feet) above sea level is not the pit of the world either. The air is clear and a little bit thin, and the night sky feels so close that you could raise your hand, brush the stars, and hear how they sing in myriad happy bells. It felt like the world was open below, like when you are on an observation desk watching the town. “The roof of the world,” kept ringing in my head when I thought about my days in Bamyan. To my surprise, when I finally looked it up, Bamyan has nothing to do with a roof; it comes from a Sanskrit word that means colorful or bright.

The first time I went to Bamyan, in June 2009, I was ready to be underwhelmed as too many people had praised its beauty. I drove there repeating like a mantra: “You grew up in Kyrgyzstan. We have mountains. Not hills. Mountains. Don’t get overexcited.” It was easy as I focused on not throwing up while sitting in the back of a car. The 120-kilometer (75-mile) drive takes an average of eight hours. The roads are so bad that you cannot drive it any faster, even in a four-wheel-drive, unless you have a very strong stomach and do not care about driving off the cliff on the next turn.

At first, the road ran through a typical brown Afghan vista. In early June, the merciless sun had already burned the grass into white and yellow shimmer. Then the hills started to show some green, yellow, and red here and there. Then the rocky mountains started to peek through the hills. Halfway through, I forgot about my mantra. I was too mesmerized by all the colors; the sheer cliffs were not just black or gray, they were colorful. The mud houses built into the hills were like brown punctuation marks in all that color.

We stopped just outside of Bamyan town as we drove up a small plateau overlooking the mountainside. The air was so clean it hurt my lungs. A river ran along the bottom of the mountain and the valley was filled with patches of green – dark green of some vegetables, light green new wheat, stripes of blue-green potato fields. Not to mention the snow-covered mountains all round the horizon. In the distance were the cliffs with carved caves and the two cavities where the Buddhas used to be.

We drove to our hotel through the center of town. It was full of the reminders of the conflict – the central square has five tanks rusting in the weeds. The road further up the hill towards the airport has a tank and a stripped-to-the-carcass truck, all eaten by rust. All around, the mountains were dotted with white marks – a sign of demining. Most of the places are not safe to walk – you never know when you will wander on a mine. Ironically, this is one of the few places in the whole country where I was able to walk freely without covering my face and without a chaperone. I was warned to make sure keep to the paths –rain still brings up many unexploded ordinances into the fields.

Our hotel, Roof of Bamyan, is located on one of the cliffs opposite the Buddhas, with a green valley with patched of green below. In the evenings, I walked back and forth on the edge of the cliff, taking in the scenery. Every sunset brought a new definition to the scenery. I started to discern individual trees down in the valley. I watched caves arranging themselves into a polka-dot pattern around the Buddhas. I noticed a smaller hole that could have been a cavity for another much smaller Buddha. I enjoyed watching how the evening mist enveloped the village below. I smiled at how the scattered evening lights glowed in the thickening evening.

On the third night, the hotel owner brought green tea to me on the edge of the cliff. We talked about the valley, the quality of its light, the people who rely almost exclusively on their potato harvest to last through the winter, war, and beauty. When the tea ran out, the owner said, “It will be good for you to go to sleep early today. I want to share with you a secret. But that has to be done at 5 a.m.” What was so important that I had to get up so early? He just said, “Let’s have breakfast together.” I was intrigued, and although I could easily have said no, it just didn’t feel right.

The next morning was as cold as all other mornings. I didn’t want to get out of my warm bed and I knew that the guard had not yet lit my wood burning stove in the bathroom, so I had no hot water. Outside was already gray, but not light yet. I cursed under my breath when I was putting on my cold clothing and wrapping myself into my patoo – a thick wool shawl. I wished I had gloves. In June in Kabul I was baking alive, here I needed gloves. I crossed the yard to get into the dining hall. Everything around seemed to be wrapped into a thin mist – not quite a fog, but not a clear morning either. The sky started to break at the horizon just to my right.

The dawn started to claim the morning. Even the cold and desire for a hot cup to wrap my palms around could not contain my curiosity. As I walked over to the edge of the cliff I smelled the wood smoke coming from the village. I knew that the valley was starting to wake up. I imagined families making their breakfasts: there would be hot green tea and fresh bread, and the lucky ones would have honey and double-cream to spread on the bread, and perhaps some walnuts and raisins to have with tea. The morning mist started to lift. The smoke was rising from some of the houses. The mountains and the clouds looked like the outline of a sketch, as the sun was only just starting to peek out from behind one of the mountains.

In what felt like an instant, the whole valley turned bright. The outlines of the fields developed into patches of various luminous greens, the trees gained their individual identities, the sky went from light gray to brilliant blue. The sun kissed the cliff with the Buddhas. These were no longer cavities left by former beauty. Even though the statues were no longer there, I still could almost see them; their presence was palpable. They towered over the valley as the personification of beauty, the fleetingness and fragility of life. I forgot to breathe, and was startled when I heard: “Here is some tea.”

I had forgotten that I had a date with the hotel owner. “Isn’t this magical?” he continued as if this was exactly what he wanted to show me. He also passed me an omelet sandwich made from freshly baked bread. I still could smell the wood coals on it and feel its warmth as I took it. “Not many expats have seen this; you know that, right?” I took a sip of a strong tea and bit into my sandwich. I barely moved and didn’t speak. I simply watched the valley. By now the sun had claimed every corner of it with colors and brightness. I was standing on the roof of the world. 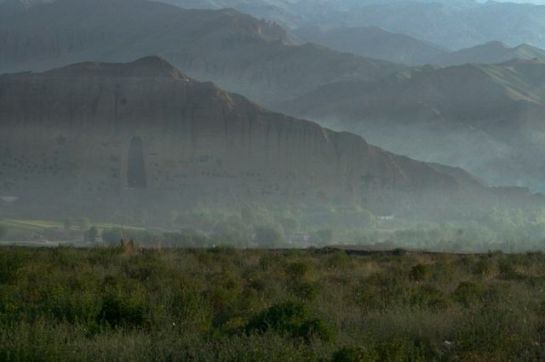 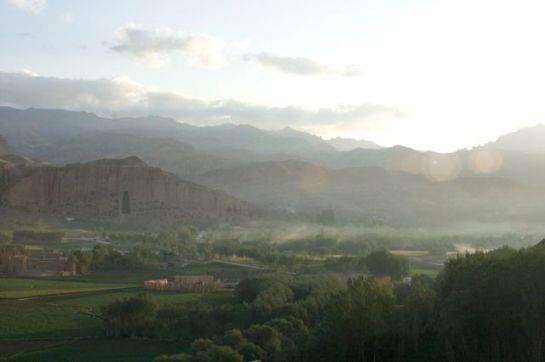